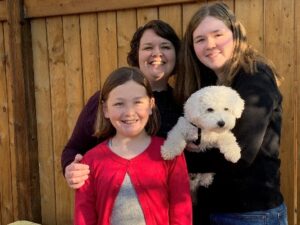 I have two daughters and two very different stories of how each of them came to find out their carrier status. I was diagnosed as a carrier several months after my son was diagnosed as a severe hemophiliac. The process was simple my blood was taken, my mom’s blood was taken and off it was sent to a lab far away to determine how this mutated gene got to my baby boy. I was the carrier and it all started with me. Our past was determined.  Now our future  became cloudy, beyond how hemophilia would impact our son, was the question of how hemophilia would affect our daughter in the future.

Our oldest child, a daughter, was 5 years old when our son was diagnosed and I found out I was a carrier. Our journey to finding out her carrier status was a long way off. Initially, we were told that she would only be able to be genetically tested when she was an adult. The issue got put on the back burner for about 7 years. When our daughter was 12 she tore her ACL and we knew she would need surgery eventually. She had her factor levels checked the result put her into the “could be” or “not be a carrier” category. The question of her carrier status was once again at the forefront and I began asking for my daughter to be allowed to have genetic testing with the answer always being, no. Having her wait until adulthood had been bothering me for a while. I preferred that she would be allowed to find out sooner as I wanted her to be able to factor (see what I did there) it in when she was making plans for her future and I felt that finding out your carrier status while planning for Post-secondary was too much at once.

About 2 years later, when I talked to the doctors at clinic once again, I was met with willingness to get her in to see a genetic counsellor. She was not a patient of the bleeding disorders clinic so we had to go to our GP to have a referral sent to our clinic. Then referral was sent to genetic counselling and a tele health was set up to discuss with us. We discussed whether she wanted to do further testing than just carrier status and how she was feeling about finding out. Our daughter was 14 by now and a great age to understand what was being done and the implications around finding out. The blood was drawn and sent back to that far off lab that would set a course for another of our children. We had added another daughter to our family who was 8 at this time. While we waited for the test results for our oldest, circumstances were in the works for our younger daughter to find out her carrier status much quicker and more directly.

I knew I had the mutation and was a carrier. Outside of hemorrhaging after the birth of my two hemophiliacs (but not my non hemophiliacs), I did not have the typical symptoms that a woman with low factor levels could have so I always thought, as did the care team, that my factor levels were normal. I had to have a minor medical procedure, but it was one where the doctors were not comfortable proceeding without knowing my factor levels and so, about 12 years into our hemophilia journey, my factor levels were tested and I was found to be a mild hemophiliac. The decision was quickly made that our youngest daughter should also have her factor levels checked and when the results came back with her also being diagnosed with mild hemophilia, we bypassed the genetic counsellor and she became a factor first card carrying, medic alert wearing, patient of the bleeding disorders clinic. Through all of that we were still waiting for our oldest daughters genetic results but after finding my factor levels were low and our youngest daughters levels were low the probability of her being a carrier was very low. Several months after the blood draw I got a phone call confirming our suspicions that she was not a carrier.

Our experience with our girls diagnoses was very different, for obvious reasons, than the experience of our son. With our son it was so automatic. You get the blood test results and you are automatically entered into this system. While each hemophiliac experience is different, the care plan is set up and gets tweaked according to your specific bleed patterns and levels. With our girls there was more advocacy required as, in the past, the issues surrounding women and girls bleeding issues and carrier status have mostly been relegated to the issues surrounding giving birth to a hemophiliac. I am saddened by the experience of some of the women who have struggled to receive timely diagnosis for their or their daughters bleeding issues in the past. That was not our experience and hopefully with continued advocacy and research on the needs of women and girls that will not be the experience of those who come after us. If you or your daughters are experiencing unusual bleeding be it heavy periods or even joint and muscle injuries that seem outside of the realm of normal, don’t hesitate to talk to the care team. The carrier mothers and sisters of hemophiliacs are not automatically a part of the bleeding disorders patient roster, it is up to us to bring up the issues we are experiencing and the questions we have to the care team.